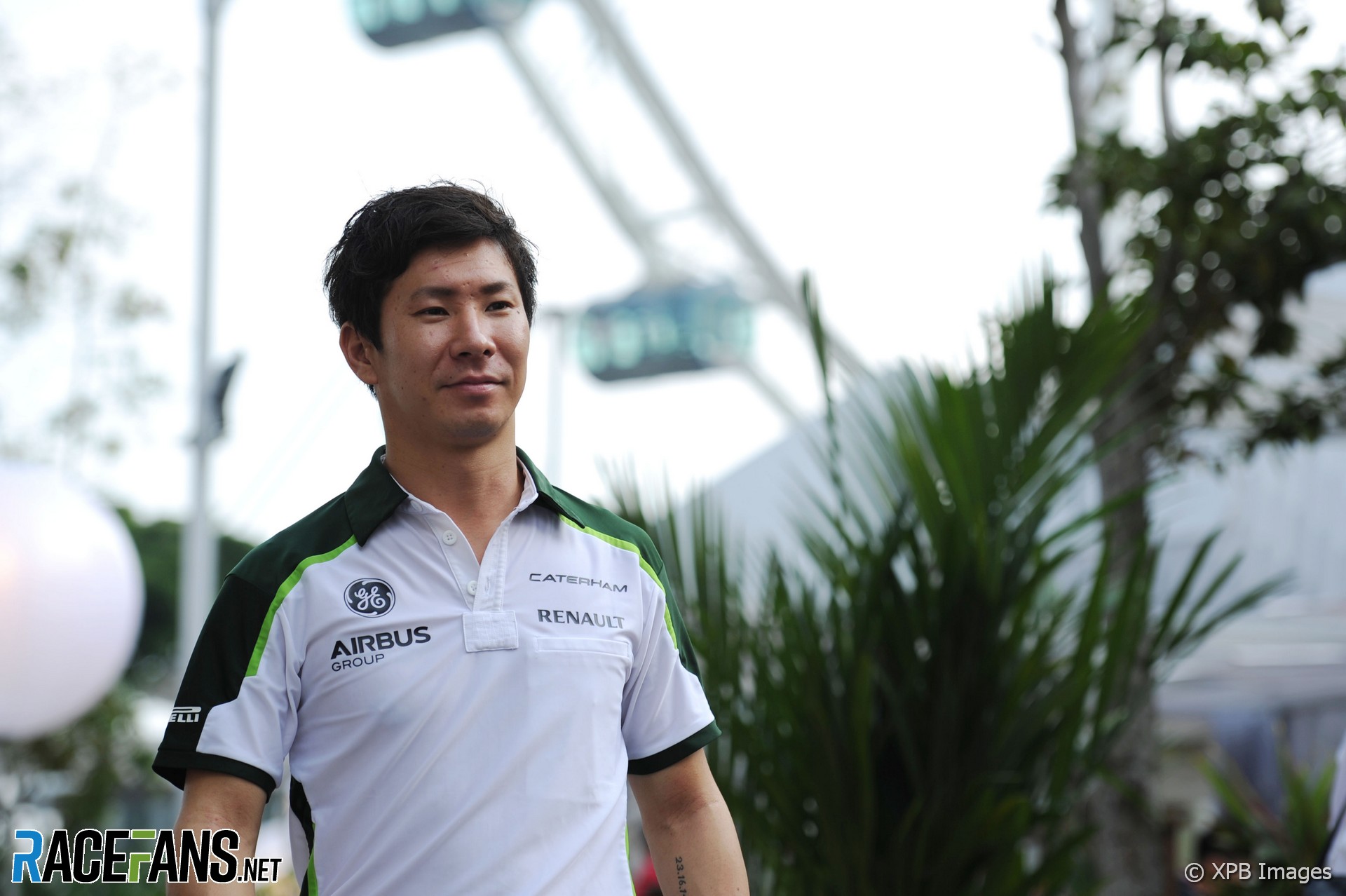 Kamui Kobayashi got his F1 break for Toyota after Timo Glock was injured during qualifying for the 2009 Japanese Grand Prix.

The team tried to get Kobayashi in the cockpit for his home race at Suzuka, but were refused permission from the stewards. But with Glock still injured as the following race approached, Kobayashi was confirmed as Jarno Trulli’s team mate for the Brazilian Grand Prix.

Kobayashi came to F1 via the Toyota Young Driver Programme. He came to their attention eight years earlier, when he participated in the Formula Toyota Racing School. This followed a successful spell in karts, culminating in victory in the 2001 All Japan Kart Championship.

In 2003 Kobayashi took second in the Formula Toyota championship, and with that shifted the focus of his career to Europe. The Italian Formula Renault championship was his first stop in 2004, where two wins in his first season gave him fourth place in the championship.

He returned to the series to take the title in 2005 with six wins, and also claimed the Formula Renault Eurocup crown with five victories.

Formula Three was his next step and he was the best rookie in the Euro Series in 2006, finishing eighth overall. He won once in 2007, finishing the year fourth in the championship.

With Toyota’s backing, Kobayashi now moved up to GP2, starting in the 2007-08 Asia series for DAMS. He remained with the team in the main series where he won once and ended the championship in 16th.

After winning the GP2 Asia series on his return, claiming two race victories, more was expected of Kobayashi’s second year in GP2. But he placed 16th once again and this time didn’t even manage to win a race.

Nonetheless he had become the third driver for Toyota’s F1 team in 2008. Glock’s injury late in 2009 opened the door for Kobayashi to become a Formula 1 driver – and the first Japanese to race for Toyota in F1.

Kobayashi certainly made an impression in his first two F1 races. At Brazil he kept chempionship leader Jenson Button behind him for several laps. But his driving tactics were brought into question – particularly when countryman Kazuki Nakajima crashed while trying to pass him.

But the rookie shone at the season finale in Abu Dhabi. After qualifying in the middle of the field he rose up the order partly thanks to keeping Kimi Raikkonen behind him at the start – no mean feat given he was up against a world champion armed with a KERS power boost button. That allowed Kobayashi to rise through the order and finish sixth, beating team mate Jarno Trulli.

Toyota’s decision to quit F1 threatened to bring Kobayashi’s F1 career to a halt. But at the end of 2010 the re-formed Sauber team announced he would drive for them in 2010.

Kobayashi marked himself out with more combative driving matched with impressive results in 2010. Though his season got off to a shaky start with crashes in Melbourne and Montreal.

Passes on Fernando Alonso and Sebastien Buemi were highlights of his race at Valencia, where he finished seventh. He was sixth next time out at Silverstone.

Another impressive drive at Suzuka yielded seventh again after a string of passes. Kobayashi continued to drive for Sauber in 2011 and had his contract extended to 2012.

Sergio Perez arrived as his team mate in 2011 but Kobayashi initially held sway, scoring points consistently in the first half of the season.

But as the year went on Perez increasingly started to get the upper hand. Kobayashi endured a point-less streak for much of the second half of the season, but ended it in time to ensure Sauber stayed ahead of Toro Rosso in the constructors’ championship.

Despite finally scoring his first podium finish on home ground in Suzuka, Kobayashi lost his place at Sauber at the end of 2012. He later announced he would not be able to find a place on the grid for 2013.

Kobayashi had been hard done by at times. In Belgium he planted his car on the front row but his race was ruined when he was involved in a crash triggered by Romain Grosjean.

On other occasions he did not get as much out of his car as his junior team mate, or found himself on a less suitable strategy. At Silverstone a careless entry into the pits resulted in several of his pit crew being mown down, fortunately with limited injuries.

But he and Perez were only separated by six points at the end of the season. Even given Kobayashi’s benefit of experience, it was surprising that while Perez was set to move onwards and upwards with McLaren, Kobayashi found himself out of a drive.

He spent the 2013 season driving for Ferrari’s GT racing team AF Corse in the World Endurance Championship and also had a couple of runs in one of the team’s F1 cars.

For the 2014 season he secured a comeback with Caterham alongside newcomer Marcus Ericsson. However the team was by now struggling for funds and missed several of the last races before making a one-off return at the season finale.

Since then Kobayashi has raced in Japan’s Super Formula championship and in 2016 joined Toyota’s World Endurance Championship team. In his first season he shared a victory on home ground in Fuji with Stephane Sarrazin and Mike Conway.