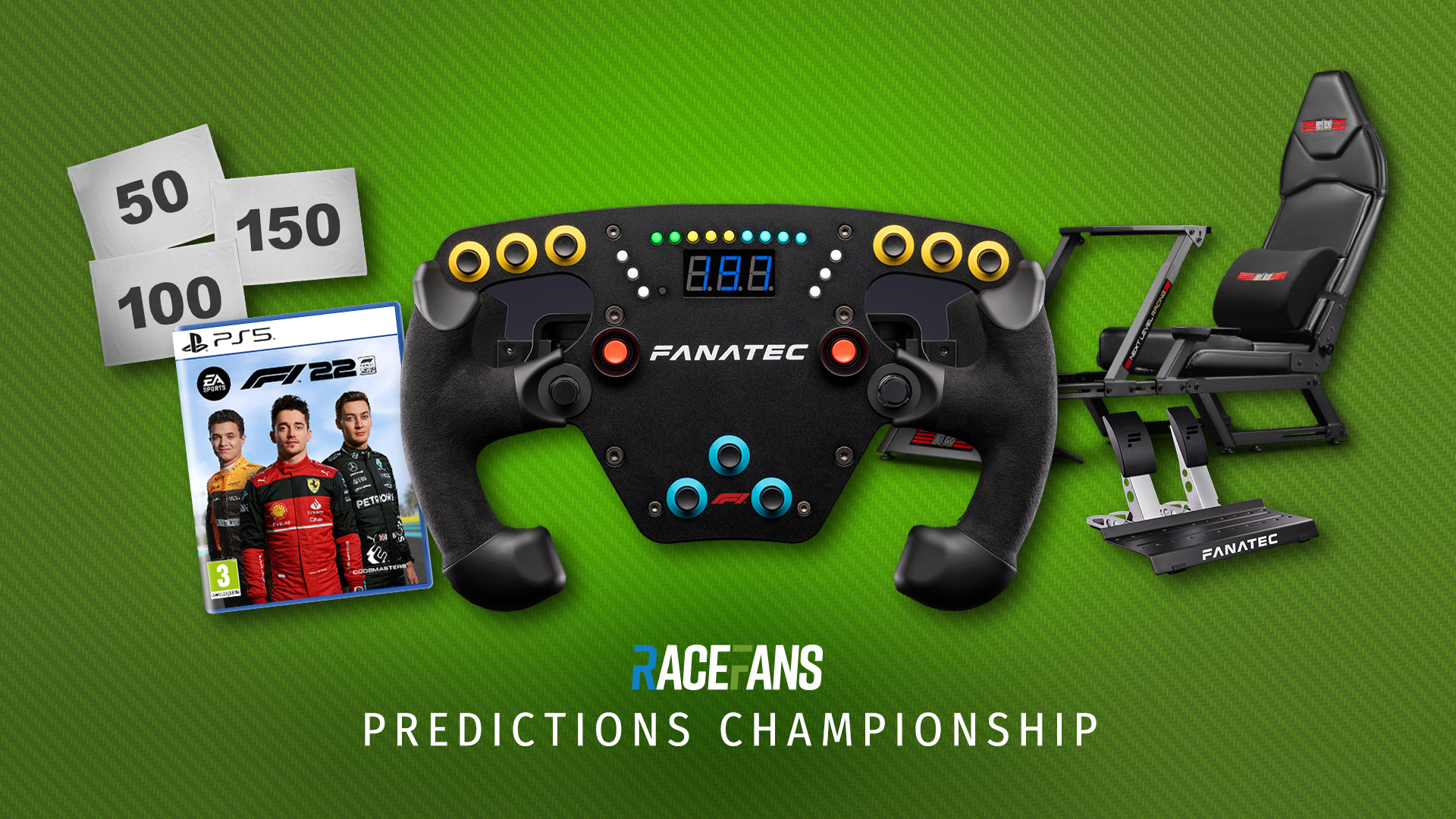 Will Ferrari continue their winning run in the French Grand Prix this weekend? Are Red Bull going to reverse their recent losses in the championship standings?

Or will Mercedes finally join the fight at the front? It’s time to make your French Grand Prix predictions.

We have a copy of F1 22 to be won every grand prix weekend for the rest of this year. The RaceFans F1 Predictions Championship is free to enter. You will need a RaceFans account to place so sign up here if you haven’t got one.

Enter your predictions for each race using the form below, and scroll down for more information on the prizes and the rules.

The first two players to win copies of F1 22 this year are @Ndalesi and @Kev.f1, who were the top scorers in the British and Austrian rounds respectively.

@Ndalesi came out on top in a tie-breaker with @Simon, who has won a BoxBoxBox track signs tea towel set. @Clav, who also won a tie-breaker to claim the runner-up spot in the Austrian Grand Prix, also gets the same prize – a deserved reward for getting within nine-thousandths of a second of Max Verstappen’s pole-winning lap time.

The top scorer over the 2022 RaceFans F1 Predictions Championship will be rewarded with an enviable upgrade to their simracing system.

Fanatec have supplied a direct drive racing set-up. Using the new Gran Turismo DD Pro wheel base, which puts out a whopping 8Nm of torque, you'll feel the road like never before. It's compatible with PlayStation, Xbox and PC systems.

Your direct drive system will be topped off with a Fanatec Clubsport Steering Wheel F1 Esports V2 and a Fanatec CSL pedals set.

And to ensure you get the most out of your new hardware lap after lap, and race in comfort as well as style, NextLevel Racing will prove an R-GT Formula and GT Simulator Cockpit.

While only one player will claim that prize, we'll also award the top two players in the competition each weekend. Codemasters will provide a copy of F1 22 for the top scorer each weekend, and the runner up will claim a F1 track signs tea towel set courtesy of BoxBoxBox.

Simracing hardware experts Fanatec are offering this highly desirable direct drive simracing kit for the player who achieves the top score in the championship this year.

By mounting the steering wheel directly to the motor shaft, the need for belt or gear drives connect the two is removed, which means the force feedback effects are not dampened or softened.

You'll need to be able to stop and go as well, so Fanatec have included their CSL pedals for unrivalled braking accuracy and feel.

Get the Fanatec Gran Turismo DD Pro Wheel Base

Supplied by Next Level

The F-GT from NextLevel allows you to configure and mount your driving equipment to simulate a single-seater formula or GT-style car. The same model was used by the Real Esport team to win the GTR Endurance eRacing World Championship.

It's designed to handle high-end direct drive wheels and includes a sliding seat and lumbar support for adjustability and comfort. The cockpit includes both the frame and seat.

Get the NextLevel F-GT simulator cockpit

At every round of the championship the top-scoring player will win F1 22, the latest edition of the official Formula 1 game published by Codemasters, for their choice of platform.

F1 22 is the only game to boast all the teams, drivers and updated tracks from the 2022 Formula 1 season.

Take control of your virtual F1 experience with immersive and broadcast options for pit stops, formation laps and more. And for the first time PC players can race in full virtual reality.

Get F1 22 for PlayStation, Xbox or PC

The runner-up player in every race weekend will also win a prize courtesy of our friends at BoxBoxBox.

Every race track in the world features these familiar signs white signs with bold numbers on them. Designed to show the distance to the corner and help racing drivers pick their braking point – we thought they’d make a great Tea Towel Gift Set.

The tea towels are screen printed on 100% organic cotton, and BoxBoxBox will send you a set of two worth £22.99.

The second runner-up player in every race weekend will also win a prize courtesy of our friends at Hidden Prints.

You will get to choose any print from their motorsport collection, which includes their popular race track maps and driver signature prints, as well as many more to choose from.

They are printed on a thick luxury 230gsm matt coated paper, and Hidden Prints will send you any size of your choice up to A2, worth £26.99, with free delivery.

All RaceFans visitors can use the exclusive discount code RF15 for a 15% discount off any order at hiddenprints.co.uk, with free UK delivery!

Get a Motorsport Print from Hidden Prints

Rules and how to enter

You have until the scheduled start time for qualifying on Saturday to make your predictions for each round. Reminders will be posted during the weekend on RaceFans, the RaceFans Twitter account and RaceFans Facebook page.

To enter, predict the pole sitter and the top five finishers in the race. You can also enter a prediction for the pole position lap time which this will be used in the event of a points tie between prize-winners.

Enter your pole position lap time prediction in the following format: MM:SS.ccc For example, for a lap of one minute, 23.450 seconds you would enter 01:23.450

You must log in using a RaceFans account to make a prediction. Registration is free and quick:

After submitting your prediction you will receive an email confirming your entry. If this does not happen, or you are concerned your prediction has not been received, please get in touch using the contact form.

Competition terms and conditions
1. Maximum one entry per household.
2. The competition is not open to employees, friends or family of RaceFans or any prize suppliers.
3. In each round players are invited to predict (a) who will be on pole position and (b) what the top five finishers will be (five different drivers) and will accumulate points in each round as follows up to a maximum score of 50:
a. Correctly naming the pole winner for the sprint qualifying race if one is held, or the grand prix if no sprint qualifying race is held: 2 points
b. Correctly naming one/two/three/four/five driver/s who finish in the top five of the grand prix: 1/2/3/5/8 points
c. Correctly predicting where one/two/three/four/five driver/s finish in the grand prix: 2/6/14/24/40 points
4. The results will be take from the appropriate final classification documents for each round as issued by the FIA
5. Whoever scores the most points in every race counting towards the championship will win the grand prize, if one is offered.
6. In the event of a tie on points the winner will be determined by who is closest to predicting the pole position lap time set in qualifying correctly. If that fails to produce a winner the editor will choose a means of deciding who has won
7. Predictions must be entered using the entry form. If you experience difficulties submitting your entry via the predictions form please enter your prediction using the contact form. Predictions will not be accepted via any other means of communication.
8. In the event of a dispute the editor's decision is final. No correspondence will be entered into.
9. No cash alternative is offered for any of the prizes.
10. Players who have won prizes will be notified by email within 14 days of the winners being announced, so they can select their prize options and supply a postal address. Once this has been done prize delivery may take up to 28 days.
11. For further information see the disclaimer